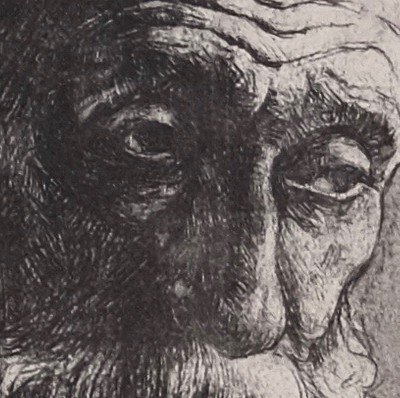 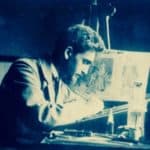 Berlin Academy
Struck studied at the Academy of Fine Arts in Berlin. In 1899, after completing his studies at the Berlin Academy, he was banned from teaching there because he was Jewish.

Jozef Israels
In 1900 Struck met Jozef Israëls, a Dutch artist, who became his mentor. Both were leading artists of their time.

Chagall learned to etch from Struck during his Berlin period. As Israel’s was important to Struck, Struck, in turn, must have been formative for Chagall in every way.

the Mizrachi movement
Struck was an avid Zionist and Jewish activist. He visited the land of Israel in 1903, showed his art at the Fifth Zionist Congress, and was one of the founders of the Mizrachi religious – Zionist movement.

the Berlin secession
In 1904, he joined the modern art movement known as the Berlin Secession.

“The art of etching”
In 1908, Struck published “Die Kunst des Radierens” (“The Art of Etching”), which became a groundbreaking work on the subject. It was a textbook that offered both theory and practical instruction 1). The book was printed on smooth paper but with bound original etchings by Max Liebermann, Paul Baum, Edvard Munch, Anders Zorn and Herman Struck himself, on veneered paper and with protective sheets.

WWI
Struck, he was a German patriot and volunteered for military service in World War I as a translator, liaison officer, and military artist. He received the Iron Cross 1st Class and was promoted to an officer of prowess. in 1917 he became the sponsor for Jewish affairs with the German Eastern Front High Command

collaboration with Stefan Zweig
The writer Stefan Zweig (1887-1968) spent the last year of the First World War in Lithuania, which was part of the so-called Ober-Ost, the eastern front where the Germans were in charge. Here Zweig met the visual artist Hermann Struck. A lifelong friendship developed between them.

Together they made the book “Das ostjüdische Antlitz” because Zweigg got to know Eastern European Judaism in Lithuania and he discovered an “authentic” Judaism that the Jews in the West had lost more and more. He wanted to show this on the basis of Struck’s drawings.

“Das ostjüdische Antlitz”, is a book that Arnold Zweig wrote with over 50 drawings by Hermann Struck. The book is a hymn of praise to the East Jews, and it stands out because when the book was published in 1920, many Jews in the west looked down on the East Jews.

A few years later “Das neue Kanaan” also appeared, in which they again worked together.

Palestine
Struck emigrated to Palestine in 1922, taught at the Bezalel Academy. He helped found the Tel Aviv Museum of Art. He visited Berlin every summer until the Nazis came to power.

passing away
Herman Struck died in Haifa at the age of 68.

museum
Struck’s home in Haifa has been the Hermann Struck Museum since 2013.

1) The book “The art of etching” deals with the differences between painting and etching and then deals with the history and technique of copper engraving, aquatint, Schabkunst (mezzotinto), Crayon way (chalk technique = gravure technique), Vernis mou (gravure form with soft varnish, paint that does not harden).

Then the materials are discussed: copper, zinc, fading (polishing), Grundieren (setting up the base), Popes (phasing). Struck describes the process of etching (Radieren) in three phases: etching in a more significant sense as the technical application of the drawing, the improvement of the plate and the Aufätzen, namely the treatment with acids.

Struck then deals with the cold needle technique and related techniques such as Punktier way (dotted line), Roulette (inking by means of a roller), Schabkunst (mezzotinto), aquatint. At Vernis mou he goes further into different shades (Tönen = shades), the Aussprengverfahren (from the description in the text it appears that it concerns sprinkling (possibly with a brush), Re-typing or galvanography (here a silver plate or silver-plated copper plate of the drawing provided without etching but by means of a galvanic copper bath, replaced from 1895 by photo galvanization and then by heliography; it provided coarse-grained, soft and warm prints), Monotype (a unique print of a polished sheet of glass or metal with a design in ink and color etching.

Finally, Struck also discusses the lithography and the woodcut.