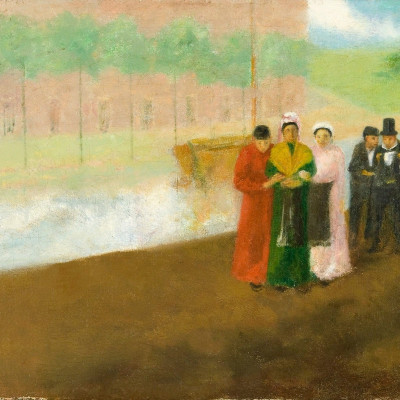 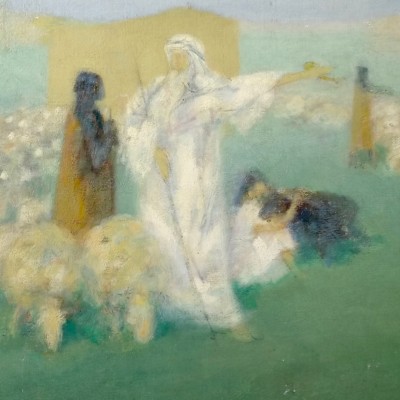 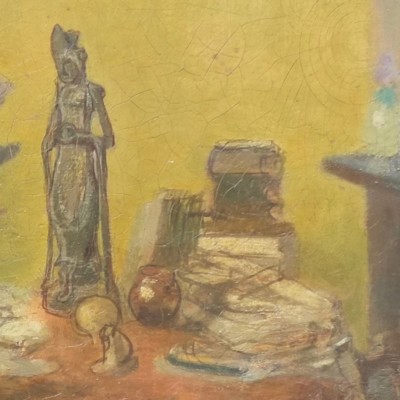 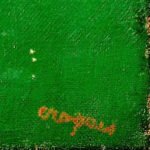 Joseph Jacob Isaacson was a Dutch painter, draftsman and photographer. He made portraits and painted Old Testament scenes. Isaacson made various trips to the Middle East. He worked in Egypt for a few periods.

Isaacson was a son of the antiquarian Joseph Jacob Isaacson and Flora Lambert.

He followed courses at the Academy of Visual Arts in The Hague, the Polytechnic School in Delft and the École des Beaux-Arts in Paris.

Joseph Jacob Isaacson became a student at the Art Academy at the age of 11.

He then tried to get his high school drawing certificate in Delft, but when this did not work he left for London, where he earned his living for ten months with portrait drawing.

After returning to the Netherlands, Joseph Jacob Isaacson received a scholarship from the well-known banker Wertheim, which allowed him to take lessons with the painter Meijer de Haan (1852-1895).

Together with Meijer de Haan, he left for Paris in 1888. He took lessons here at the École des Beaux-Arts. Through De Haan (who also worked closely with Paul Gauguin), Joseph became friends with Theo van Gogh, the brother of the painter Vincent van Gogh, and thus also became acquainted with the then virtually unknown Vincent van Gogh. Theo van Gogh regularly mentioned Isaacson in his letters to his brother Vincent.

Isaacson was the first to write a rave criticism about Vincent van Gogh in 1889. Joseph Jacob Isaacson made his money in Paris with portrait drawing and was a correspondent for the art magazine “The Portfolio”. In this magazine, under the title “Feelings about Dutch art at the Paris World exhibition”, he devoted a reflection to the then totally unknown Vincent van Gogh.

Isaacson was the first Van Gogh reviewer to be highly praised by Isaacson in 1889. Who, Isaacson wondered in his reflection, wondered in shapes and colors the life of the 19th century? His frequently quoted answer was: “I know one, a single pioneer; he is struggling alone in the great night, his name, Vincent, is for posterity. “

Joseph had a varied life, given his long list of places to stay next to Amsterdam; In The Hague he was a photographer from 1878 to 1880 with wandering through Rotterdam and Mainz and he stayed in Delft from 1880 – 1881 after which he left for London in 1882. Around 1884 he stayed again in Amsterdam but left in 1888 for Paris where he spent two years remained until he returned to Amsterdam in 1890. In 1893 he moved to Nieuwer-Amstel (Amstelveen) where he lived until 1896. From there he also made a few trips to Egypt;

In 1896 he lived in the Egyptian capital Cairo for four months and in 1898 he exhibited paintings with Eastern scenes in a gallery in The Hague. Isaacson also got his inspiration from the Old Testament.

In 1904 he married Emmerentine Weill, ten years younger, sister of the harpist Anna Weill. and went back to Egypt in 1905 with her. Finally they settled together in Amsterdam again.

In 1906, a year after a major Van Gogh exhibition, he again devoted attention to Van Gogh in a 60-page document entitled “A new point of view in art; Vincent van Gogh and D.B. Nanninga “. In this writing Isaacson argued for the art of his student Nanninga. He didn’t need to know much about Van Gogh anymore. He wrote that the work surprised him but not moved him. Isaacson had a more lyrical direction in art.

Isaacson led a fairly isolated and withdrawn life in Amsterdam and was a slow-working, introverted painter, who increasingly immersed himself in Jewish mysticism.

Joseph Jacob Isaacson and his wife were killed in 1942 in Auschwitz.

Deceased during WW2Artists in Paris