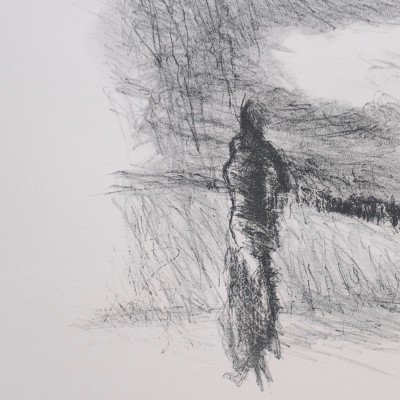 homage to my circle of friends 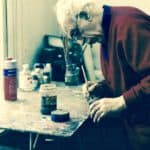 Leo Schatz was a Dutch painter, draftsman, poet and resistance fighter. He described himself as a “melancholy optimist”.

youth and education
Leo Schatz’s ancestors came to the Netherlands via Poland and Germany. His grandfather was a singer. His father did not succeed him. He was a free thinker and socialist at a young age. He was an intellectual man who had difficulty adapting to the consequences of the crisis.

This crisis after the infamous stock market crash of 1929 left the family, which now lived in the socialist Betondorp, in deep poverty, but Schatz grew up in a loving family on the Nachtegaalstraat in Amsterdam-Noord. Together with many neighbors, the family sympathized with the social democratic SDAP.

When a suspicious neighbor once asked Schatz and his brothers if they were Jewish, they answered with full conviction: “No, we are workers.”

Young Leo became a member of the AJC (Workers Youth Central). Thanks to a culturally interested doctor’s family in the Watergraafsmeer, with whom he came into close contact, he became acquainted with the world of music, literature and visual arts that was new to him. There he was encouraged to continue with his hobby: drawing.

It was Albert Hahn Jr. who recommended that his parents send him to the applied arts school, which would later be called the Rietveld Academy. In 1939 Leo Schatz took his final exam there and then followed a course at the Rijksacademie and the Rijksnormaalschool for drawing teachers, both in Amsterdam

WWII
Not much later, in Schatz’s words, the family was “made Jewish”. War broke out and Schatz lost his parents and twin brother. When the Schatz family received a call to report in 1942, he and his twin brother Jacques left. Jacques was to be arrested in March 1944 and did not survive. Leo, 22 years old, joined the resistance.

His parents were deported to Auschwitz and were murdered there. “The goodbye was terrible. You will never forget that. I had never seen my father cry.” They could not go into hiding. They had no sou.

The hiding Jewish resistance boy Leo Schatz recklessly shook the hands of the bad chief of police in The Hague and the nsb councilor when handing over the bread.

Together with Wim Polak and Bea Biet, he also published books that were printed for the benefit of the resistance – simple children’s books with titles such as ‘Ankie is birthday’ and ‘t Arme boertje’, which were sold in tens of thousands of copies.

Polak also did technical work for the illegal Parool, while Schatz drew the headlines of that newspaper. Polak’s hiding name was Jan Heertjes. He himself stayed under the false name Jan Mulder in The Hague.

wedding
Back in Amsterdam a marriage followed with Sonja Kopuit, in 1948. Sonja also lost a lot of family in the war, she also carried a traumatic war history.

Together they decided to “just go live”. And so, with finding love and starting a family, life really began. “My life actually started with her,” says Leo.

Happy years followed in the Amsterdamse Plantage, in which lecturers at art academies, art exhibitions and carrying out art projects generated just enough money. The family immersed themselves in the warmth of everyday family life and the bohème of post-war Amsterdam. By teaching at various (art) training institutes, he made a living for his family, which soon had two daughters: Henriëtte and Irma.

Denmark
Shortly after the war, Leo Schatz – as a former resistance fighter – was invited to Denmark by the Danish government. He befriended several Danish painters and thanks to them came into contact with the work of the French artist Pierre Bonnard, which would inspire him for the rest of his life.

Back in Amsterdam he experimented and mostly made expressionistic canvases. He developed his own very colorful form of expressionism.

teaching
In 1969 he became a teacher at the Rietveld Academy and at the Minerva Academy in Groningen. As his style develops into a colorful expressionism, exhibitions follow in 1978 at the Singer Museum in Laren and at the Krikhaar gallery in Amsterdam

Irma
After the Kijkduinstraat in Amsterdam-West (1948) and the Plantage Parklaan (1954), the family moved in 1981 to a large house on the Bredeweg in the Watergraafsmeer. There they are struck by a disaster: daughter Irma, who developed into a promising artist and painter, died of a heart and lung disease in 1984 shortly before her 35th birthday after a long illness in 1984.

For two years her father only painted paintings with her shadowy shape, with weakened shoulders and sunken cheeks.

Sculptor Jan de Baat said about this: “Actually Leo had found something in Irma that he had lost, namely: being at home. And you understand that when Irma died, the suffering was insurmountably great, and still, it will never pass. But he has now integrated it in such a way (…) that he is one of the greatest painters I have ever met. “

Leo Schatz is now a well-known and important painter and in 1989, at a new exhibition in the Singer Museum, the monograph ‘The color of Leo Schatz’ was published with a contribution by Bert Schierbeek.

In 1991 Leo organizes an exposition of Irma’s work in the Jewish Historical Museum in Amsterdam with the simultaneous publication of the book “Irma Schatz 1949-1984. Drawings / drawings”.

Sonja
A year later, in 2003, an exhibition at the Singer Museum opens under deeply tragic circumstances: Sonja Schatz, died recently suddenly and her death casts a heavy shadow over the opening meeting where the beautiful book ‘Color has drawn a man ‘ is being presented. Daughter Henriëtte, together with several others, took the initiative for the publication, which, partly thanks to many subscribers, has become a resounding artistic success.

Poems
After the sudden death of his wife in 2003, after having been inseparable for more than half a century, Schatz was no longer able to paint because of the shock, but five days after Sonja’s death from Leo his grief was unexpected: it arises until his own surprise a poem. “… The studio has lost its altar …”, Schatz suddenly said.

Every lonely morning he writes a poem; he draws in the afternoons: an unstoppable stream of bizarre fantasies in black pen strokes.

In 2005, a selection of both the drawings and the poems appeared in the collection ‘I have no talent for sorrow’ at an exhibition in the Van der Togtmuseum in Amstelveen.

documentary
In 2007 director Rudolf van den Berg made a documentary about the life and work of Leo Schatz, in collaboration with Interakt Television Productions and the Jewish Broadcaster.

This happened during the presentation of the book “Every head contains a different head” and the opening of the exhibition of the same name in the Museum Jan van der Togt in Amstelveen. Book and exhibition were based on his recent work.

Passing away
on November 6, 2014, at the age of 96, Leo Schatz died.
He was buried at Zorgvlied. He wrote just before his death;

I always want to rest
although I am not tired
and close the eyes
to see
what I do not understand.

I always want to walk
although I am tired
with the nose in the wind
about the very track
to find again.

There is always the urge to live
although its meaning is missing
and yet I see myself
with surprise
climb the highest mountain.

Leo Schatz was a special and renowned painter. His acclaimed colors are of enchanting splendor. He paints with great passion until his death. Every day he climbed the stairs to his studio and continued to innovate.

For Schatz, painting was a strategy to “tackle the unacceptable.” But that didn’t mean it was therapeutic, or comforting. The war did not occur in his paintings. “I never painted my parents. The war never played a role in my paintings. No, I solve that at night.“

Schatz suffered from those nightmares all his life. “The Muffs” always followed him in his dreams. “But the nice thing is that I was always in charge of them.”

there is no consolation
“There is no consolation,” Schatz often repeated. “And grief never disappears. It changes. From ice cold to warm sadness. But you don’t “process” it as if it were going to diminish.” He described the flow of fantasy as a response to fear and loss, to maintain the meaning of life. “And that with your fingers in the paint.“