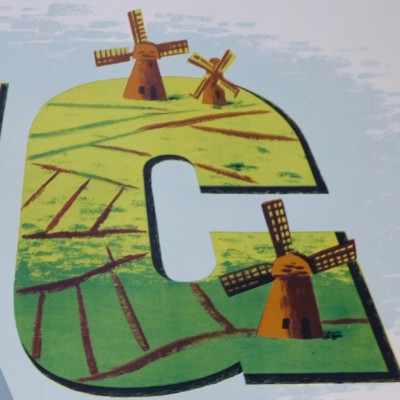 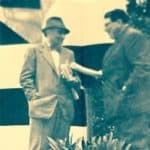 The Lewitt-Him design partnership was formed in Warsaw in 1933 by Jan LeWitt and George Him. Both were both graphic designers and poster artists. During the Second World War, Lewitt and Him created many posters and other publications to support the British war effort. Letwitt Him’s design work combined visual precision with surrealistic eccentricity. The partnership was dissolved in 1955.

Le Witt came from a Jewish family and after his schooling in Czestochowa he spent more than three years traveling in Europe and the Middle East. He started working as an autodidactic graphic artist and designer, and also worked in machine building, in the soap industry, in a distillery, as a bricklayer and as an agricultural worker.

George Him was born as Jerzy Himmelfarb in 1900 to a Polish-Jewish family in Lodz. After his studies in Warsaw, he studied Roman law in Moscow, but then left in 1917 due to the Russian revolution to close the university where he studied. He moved to Bonn and obtained his PhD in the study of comparative history of religions in 1924 at the University of Bonn and thus obtained his PhD. After that Him decided to study graphic art in Leipzig at the Academy of Graphic Art. Before he graduated in 1928 he already received commercial assignments. He spoke five languages ​​and his hobby was telling stories in all possible visual media. He returned to Poland, where he changed his name in 1933 and also started a design partnership with Jan Le Witt.

Collaboration
In 1933 Jan Le Witt met the graphic artist George Him in a cafe in Warsaw and started a collaboration. Their characteristic style arose from “combining surrealistic and cubistic tendencies with capricious humor”. Le Witt wrote about their meeting;

“When I met Lewitt … we discovered that we had almost identical views on graphic design. We were both perfectionists. We also discovered that instead of showering each other with compliments, we could achieve a much higher level together. Although we have never stopped arguing over the years, the results seem to indicate that we were ultimately not mistaken about this. ”

London
He and Le Witt worked together in Poland for several years before moving the Lewitt-Him design company to London in 1937. Work produced by the partnership in Poland was reproduced in foreign publications and caught the attention of Philip James of the Victoria & Albert Museum in London and the directors of the publishing house Lund Humphries.

These two organizations sponsored the relocation of the partners to London. The Victoria & Albert Museum prepared their immigration and Lund Humphries set up an exhibition of their graphic work.

After settling in London, they soon received commercial contracts. The Lewitt-Him partnership, for example, designed advertising posters for London Transport and Imperial Airways.

WW II
During the Second World War, the couple produced posters for, among others, the Ministry of Information, the General Post Office and the Ministry of Food. They also designed murals for canteens of war factories and posters and books for the Polish government in exile and for the Dutch government in exile. Le Witt was also a firefighter for Kensington and Chelsea; the London neighborhood in which he lived.

Le Witt married Alina Prusicka in London in 1939, after she also fled Poland before the Second World War. She was the author of many of the children’s books that he illustrated. They had a son, Michael Le Witt, in 1945.

End of Le Witt-Him partnership
Lewitt-Him dissolved in 1955 when Le Witt wanted to concentrate on his artistic work as a painter and individual artist.

Le Witt after the partnership
Among the many Le Witt projects were designs for sets and costumes for ballets in Sadler’s Wells and in particular the decor and costumes for the Cranko Ballet, Morceaux Enfantin.

He also worked in other media such as glass sculpture in Murano and tapestries for Tabard in Aubusson. He had individual and group exhibitions in Great Britain and throughout Europe and the US. Elsewhere he exhibited in the Musee Grimaldi in Antibes, the Piazza San Marco in Venice and in MOMA in New York.

George Him after the partnership
George Him continued to work as a commercial designer. One of the advertising campaigns he illustrated was the Schweppeshire campaign in 1950 for the beverage company Schweppes. His other customers included different airlines, including Pan-American Airways, El Al and American Overseas Airlines plus the publishers of Punch and Penguin Books. He continued to illustrate books, but also designed exhibition stands, such as the Australian stand at the 1960 Ideal Home Exhibition and large shop windows, in particular for the De Bijenkorf store in Rotterdam and the Christmas windows of 1961 for the Design Center in London. From 1969 to 1977 he taught graphic design at the Leicester Polytechnic. He was an active artist until the end of his life. In 1977 he received the Francis Williams Book Illustration Award and in 1978 he became a Royal Designer for Industry.