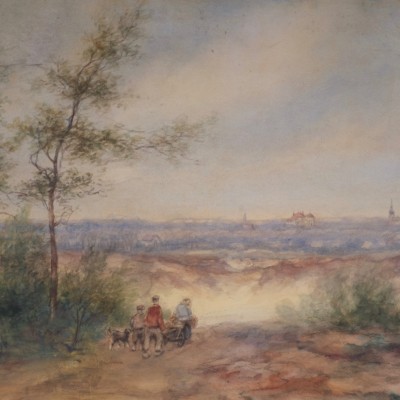 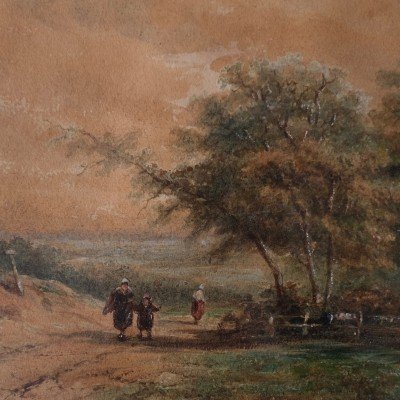 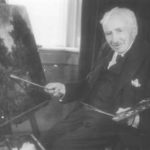 Lion Schulman was born on March 27, 1851 in Hilversum. In February 1943, he was almost 92 years old and was deported and murdered on arrival in Auschwitz on 19 February.

Schulman is one of the artists of the Larense School. Many of his works are in private collections. He mainly painted romantic landscapes, usually forest views. He has also been an art dealer. He opens business in Rotterdam (1890), Hilversum (1894) in Laren (1898). In 1895 Schulman organizes the first major exhibition of Gooise painters and manages – as a trader – to sell the works of artists such as Hart Nibbrig, A. Legras and Offermans abroad. Schulman maintains a relationship with the Hermans Koekkoek the Younger gallery in London for a long time. As a trader he introduces the work of the artist J.B. Jongkind in the Netherlands and exhibits the oeuvre of the Hungarian painter Mancaksky and his contemporaries in his art room.1)

Schulman mainly found subjects for his paintings in the Gooi region and in the Gelderse forests. From 1840, they are very popular with the romantic painters. Het Gooi is also pleasantly situated in a valley, surrounded by half a circle of hills, in the vicinity of “beautiful, wooded avenues”, making it look like a “pleasure garden”.

Schulman is the son of David Schulman, jeweler, and Grietje Spier.2) The jeweler is located at Kerkstraat 24 in Hilversum, and sells watches, gold and silverware, pendules, clocks and alarm clocks. Schulman, like his brother Jacob, starts his career as an apprentice jeweler, but has a great interest in artistry.

His father David Schulman apprentices him in 1866 with James de Rijk. From 1866 to 1873 Schulman works in the painting studio of James de Rijk. This learning trajectory fits with the artists’ ideals of that time. Artists want to go back to the purity and utopia of the Dutch Golden Age. In Hilversum, the artists stand out because of their “flat velvet hat and short jackets”. In addition to James de Rijk, the artist Koekkoek, Kruseman, Danekes, Ravenswaaij, Rentink and P.G. are also working in Hilversum. van Os.

Schulman is the youngest and also last student of James de Rijk, with whom he becomes good friends.3) One of the first works that Schulman painted – in 1869 – is the parental home of his teacher Langgewenscht.

After his apprenticeship with James de Rijk, Schulman turned to Jan H.B. Cake cake that gives him instructions. Jan H.B. Koekkoek is the most versatile painter of the famous painter’s family.4)

In 1877 Schulman makes his debut with Arti [Arti et Amicitiae Society] with a Goois Landscape – a view of the Ankeveense pad near Hilversum. Lion Schulman sells – in 1877 – a number of landscapes and wins a large painting of considerable value during the draw in Arti. The newspaper De Gooi en Eemlander notes with satisfaction that connoisseurs see a promise for the future in the work of the young debuting Schulman.5)

In 1879 and 1880 Schulman is nominated by a committee to the King and Queen as “pensioners”. These “boarding houses” receive a royal subsidy equal to the annual wage of a good artisan or mayor.6)

De Gooi en Eemlander reported on 8 February 1879 that it was “highly pleasant” that a fellow citizen “had an honor and privilege.” Lion Schulman was selected from a large number of others who had to take aptitude tests for this. royal subsidy. And: “It is a” high honor “to be” Pensionnaire of Their Majesty the King and Queen, “a powerful encouragement and support to move forward on the art track with diligence and dedication.” And: “For the Lord Koekkoek’s appointment (from Schulman) is a flattering acknowledgment of appreciation for care and information, as a result of which his pupil has been properly judged of this privilege. ‘

In August of 1879, the publisher of De Gooi en Eemlander displays two Gelderland landscapes of the pensionnaire, painted in the surroundings of Oosterbeek, in his office in Hilversum. On this occasion, the newspaper notes with satisfaction that “it is the feeling, of many, that the youthful painter – who painted these landscapes for the October Fair exhibition in Arti – as” the retirement of Z.M. de Koning and H.M. de Koningi has not stood still “. And that Schulman “tries to make his work more complete” and “succeeds”.

In July 1879, Schulman’s work caught the eye of the Rotterdams Nieuwsblad reviewer, during an exhibition ‘with the work of Living Masters’ in Haarlem. This exhibition is organized for the benefit of the widows, orphanage and support fund Lithografia. Schulman surpasses with his work, the newspaper believes, more famous painters at this exhibition. “For example, the green in the painting ´Gelders Landscape on the Rhine´ is ´better in hue´ than the green in the painting Nº 73 by the famous painter Otto van Thoren: ‘Hungarian Horses in the Meadow’.”

Schulman also receives a royal subsidy in 1880. Carel Dake, later professor at the Rijksacademie and chairman of Arti, 7) also appears on the list of pensionnaires in 1880. In 1880 the mayor of Hilversum sent a painting by Schulman to the raffle, which was ‘protected’ by the King. and Queen, and is organized because of the “distressed of the flood”.

At the age of 39, Schulman embarked on his business adventures. In 1894 he opened an art dealership at the Zuidblaak in Rotterdam.9) In 1895 Schulman wound up this art dealership. He has the paintings, etchings and drawings auctioned at the Brakke Grond, at the Nes 49, in Amsterdam.10) His brother Jacob Schulman Schulman, jeweler, also organizes auctions here. 11)

Schulman opened an art and office bookstore in Hilversum in 1894 at Kerkstraat 51, next to the furniture warehouses of the Frank brothers. 12) In 1896, the Schulman Art and Office Bookstore in Hilversum broadens its working area. Schulman’s shop is “the only depot of the Rozenburg country bakery” and sells painting supplies, for example the oil and water color of Claus and Fritz, also portrait, poetry and stamp albums, stereoscopes, stereoscope plates, strange stamps and frames. Kunsthandel Schulman also offers its services as a restoration studio and frame maker. 13)

The fact that Schulman enters the art trade relatively late has to do with a number of factors: paintings embodying Dutch utopia are attractive because of their “Dutchness”, inspired by 17th-century painting. Other significant factors are the acquisition of works by Dutch masters from the Seventeenth Century by rich American industrialists (after 1875), and the collection of paintings from the Hague School and Laren School by British and American collectors. The Hague School is in the United States at least seen as a (partly impressionistic) continuation of the Dutch school from the 17th century. Schulman’s work also dates back to the “Dutchness” of the 17th century.

Between 1895 and 1910 – advertisements from Kunsthandel Schulman appeared regularly in the local newspaper. And short articles, such as a report that the portraits of H.M. de Koningin and Z.K.H. Hendrik Hendrik, 16) hang in the Hilversum shop in 1904, at Kerkstraat 53. In 1904, Schulman was one of the co-founders of an Orange association in Hilversum.

The Schulman store is also a correspondence address for advertisers of De Gooi en Eemlander.

Schulman organizes various exhibitions in his art room. Jan Koekkoek, for example, exhibits a watercolor. 17) And in the summer of 1902, Schulman managed to bring a collection of interesting modern paintings to Hilversum. In his “very well-lit, intimate art room” of the hanging works of H.W. Mesdag, Wally Moes, J.H.B. Koekkoek, G.J. Koekkoek and his own son David. The exhibition is free of charge. 18)

This exhibition is a “overworthy” visit, writes the editors of De Gooi en Eemlander. 19)

In 1902 there was a charity exhibition in Kunsthandel Schulman, organized by the Hilversum Gymnastics Association “for the benefit of the concentration camps” (farmers’ prisoners of war in English concentration camps in South Africa). This exhibition features work by Lion Schulman and his son David.

On 2 February 1910, when Schulman was 59 years old, the art trade burned out completely. A chimney fire lightens the thatched roof of the store. The tenants on the upper floor can hardly save themselves. 20)

Schulman is still active as an art dealer for some time after the fire. In 1916 he acquires a collection of old paintings for a collector. Among the purchased works are masterpieces, including a “capital painting” by Murillo, a landscape by Ruysdael and a work by Dirck Maes. 21) After the First World War, Schulman – he has passed the age of 65 – ended his activities as an art dealer and devoted himself to painting. 22)

After the death of his wife, in 1929, Schulman moves to Amersfoort where his daughter Margot lives with her husband, Willem Willing – journalist from the Amersfoort daily. Schulman regularly participates in exhibitions of the local artists’ association in Amersfoort. His work is also noticeable during an exhibition of De Kunstkring. The reviewer regards Schulman’s painting as “youthful and fresh,” a work “that would do justice to many young students of the academy.” In Schulman’s work, the sun is also “always an important element”. 23)

On Sunday, March 23, 1941, the Sunday edition of Het Algemeen Handelsblad recalls that Lion Schulman celebrates his 90th birthday on March 27. 24) Many artists, the newspaper predicts, will show their sympathy, because Lion Schulman has attracted many friends because of his modesty. 25) In 1942, Schulman moved to Amsterdam. He lives briefly in Pension Glück at Sarphatistraat 103. From there he is arrested and deported to Auschwitz and killed.

1) See, among others, De Tijd and the Nieuwe Apeldoornsche Courant of 28 March 1931 on the occasion of the 80th birthday of Lion Schulman.

3) James de Rijk died in 1882. When his widow M. de Rijk-van Delden died in 1895, Lion Schulman took care of the artistic legacy. He was responsible for the description and valuation of the Rijks paintings and his collection of drawings, engravings and etchings, which were sold during a public auction. The Rijksmuseum’s work can be found in the Rijksmuseum, Het Rijksprentenkabinet, Teylersmuseum in Haarlem, the Rijksprentenkabinet Leiden and the Goois Museum in Hilversum.

4) The fact that Schulman is becoming an art dealer and retailer may be related to his contacts with Koekkoek. Hein’s father, Marinus Adrianus Koekkoek, sold painting supplies in Hilversum before he left for Kleef.

Numerous biographical articles state that Schulman received a royal subsidy in 1875, which is incorrect. His debut as an artist first took place in 1877.

Jacob Schulman, first jeweler, then expert in tokens and antiquities also uses the Auction House C.F. Roos and Co, on the Brakke Grond, on the Nes 49 in Amsterdam. Jacob Schulman opened an auction house on Keizersgracht in Amsterdam in 1902.

16) David Schulman presents himself in Arti in 1904, 25 years after his father became Pensionnaire. After 1904 the fame of David Schulman mainly takes over. He received the Willink van Collen Prize in 1909, and in 1915 the silver medal at the International exhibition in San Francisco.

18) In 1906 an official from the municipality of Hilversum judged that Kunsthandel Schulman had to pay “entertainment tax”. See De Gooi en Eemlander, 6 October 1906.

25) In addition to this article, which is the shadow of the war, we find statements by Dr. T. Goedewaagen, Secretary General of the Department for Public Information and Arts. He indicates what the five-part task will be of the Culture Room.