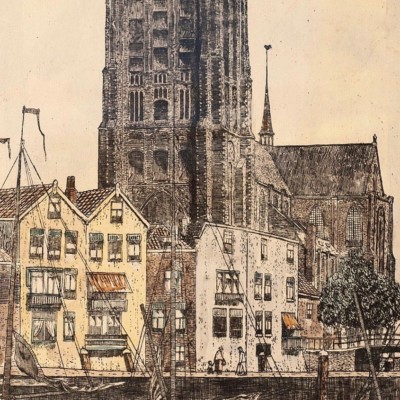 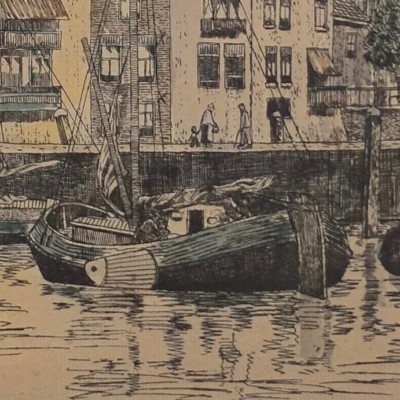 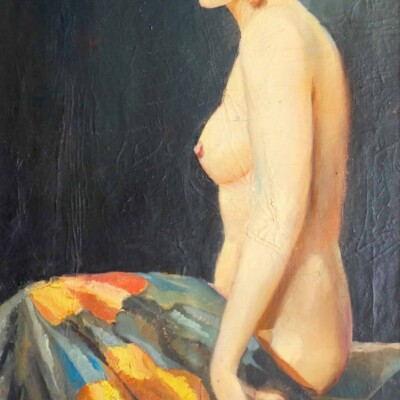 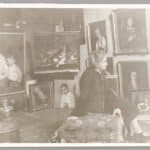 The artist Marianne Franken was born on the Nieuwe Prinsengracht in Amsterdam on March 11, 1884. She died shortly before the capitulation of Germany on April 4, 1945, in the Bergen-Belsen concentration camp, Germany.

Marianne Franken emerges as an artist in 1917. She exhibits as a “starting artist” at the Summer Exhibition in the Amsterdam Panorama Gallery. In addition to Marianne Franken, Piet Mondriaan, (1) Jan Sluyters, Else Berg, Wim Schuhmacher, Dirk Filarski and Harry Kuyten are also participating in this exhibition. The reviewer in the Algemeen Handelsblad likes the “small flower arrangements” that Marianne Franken shows at this exhibition. Frankens paintings fascinate with “the glow of fascinating color.” (2)

Franken became a member of Arti in 1918 and participated in the autumn and membership exhibitions of this most important art society. Arti, in full “The Arti et Amicitiae Society” is an important cultural and social meeting point for artists and the Amsterdam elite. The distinguished citizens of Amsterdam are eager to become members of Arti. (3) The social importance of Arti can be seen in the articles that appear in newspapers and magazines. (4) Franken became a member of Arti at a time when the exhibitions in the society were followed with great interest. (5) Her membership can be seen as a token of recognition for Frankens talent and her expertise as a portraitist and still life painter.

In 1918 the reviewer of the Algemeen Handelsblad writes economically about the work of Franken in the halls of Arti. (6) Frankens still life – according to the newspaper – possesses besides the ‘petillante dolls’ by Lizzy Ansingh, (7)’ not much of his own to share with to count. (8) In addition: what counted for him were cabinet pieces that had the same ‘atmospheric freshness’ as Nicolaas Beets Camera Obscura.

Marianne Franken has regularly exhibited during her lifetime with the Amsterdam Joffers, a group of artists who studied at the Rijksakademie at the end of the nineteenth century. The Amsterdam Joffers drink tea every week at Therese Schwartze, or meet each other at Simon Maris’ studio. They all come from a well-to-do environment and are not income-dependent on art. Thérèse van Duyl-Schwartze, is called “the queen of Dutch painting” and is the most important female artist of that time. Thérèse van Duyl-Schwartze exhibits her work in Kalverstraat, at the renowned Buffa and Sons gallery, (9) which also trades in international art.
Franken excels in children’s portraits. During her lifetime, her work regularly hangs in a room at Arti and at exhibitions of the artists’ association “The Independent” in the Stedelijk Museum. She also exhibits work at St. Lucas, the Rotterdamsche Vierjaarlijksche and takes part in exhibitions in the country, for example in Pictura in Dordrecht. (10)

Franken paints hawkers and children from the Jewish neighborhood and surroundings. She makes portraits of Jewish personalities, such as the pianist Marjo Tal, the historian Caroline Eitje, (11) the dancer Chaja Goldstein and the painter Martin Monnickendam, who she repeatedly portrays. Franken draws and paints “en plein air”, works in the city of Amsterdam and in Artis.

When Franken exhibits in the great hall of the Vrouwenclub in Amsterdam in 1933, Martin Monnickendam writes in the Telegraaf that her works “in terms of local color” are well taken. Franken touches on him the feeling of “at home”. A characteristic feature of Franken’s painting is a dark, heavy brush stroke, with no fine transitions that give her paintings a monumental character. The style of her paintings is called Dutch impressionism, late impressionism and nowadays sometimes expressionism. (13)

Franken starts her training as a painter late, because her father sees ‘no future in’ art. (14) Only after she ‘complains her need’ to Martin Monnickendam and paints an oil portrait of her father, her parents agree her training wish.

The teachers Marinus van der Maarel, (17) Cornelis Spoor and Martin Monnickendam correct ‘still life and model’ in these studios after the example of the French art schools, where a model is drawn together and worked together in a studio.

It is unclear until when Franken works on the Singel in the studios. In 1918 she participates in an exhibition at Arti. Franken probably worked for six or seven years on the Singel. But she might as well have remained model drawing until 1920. In that year, the institution moved to the Gooi where Freule Marie de Jonge by the architect A.J. Boland had a house built in expressionist style with 8 studios.

After her studies at the Singel, Franconia travels to Italy where she travels for a while. Back in Amsterdam, the artist sets up a studio on the Prinseneiland – behind the Haarlemmerstraat. The Amsterdam expressionists G.H. Breitner and Kees Maks atelier. Marianne Franken paints large still lifes, merchants, servants and children from the neighborhood in her studio on Prinseneiland. (18)

Marianne Franken works on the Princes’ Island, but she lives with her parents, Abraham Franken and Zipora Königsberger (born in 1854). After they died, Franken moved her studio to the parental home on the Nieuwe Prinsengracht in Amsterdam.

An interesting neighborhood where a lot happened. In 1894, the General Diamond Workers’ Association was established in the Café Centraal on the corner of the Nieuwe Prinsengracht and Weesperstraat. The first modern trade union in the Netherlands was founded in this illustrious place. Before the Second World War many Jews lived in this area, such as Rabbi Jacob Neubauer and Walter Süsskind, a renowned German music teacher, the sculptor Josef Mendes da Costa (19) and the graphic artist Samuel Jesserun de Mesquita, the teacher of M.C. Escher.

It is here, Monnickendam writes, that “the old Amsterdam ghetto begins.” The Binnen-Amstel with its Skinny Bridge, the old men’s and women’s house, the steamboats and the barges, the Weesperstraat with fish and fruit stables. (20)

In 1937 she organizes a studio exhibition in her home studio on the Nieuwe Prinsengracht, which is discussed in De Telegraaf by the important art critic Kaspar Niehaus. (21)

During the second Centenary exhibition in 1939, Franken received the Second Premium for her still-life with yellow feather. (22) Her last exhibition takes place in 1941. On Saturday 1 March 1941, Arti opened an exhibition with works by A. van Beek, Marianne Franken, CM Garms, H. Ijkelenstam and Harry Kuyten.

During her life as an artist, Franken has always stood out in group configurations because of her strong use of color and preference for “kitchen pieces”, group portraits and children’s portraits.

Among her best works she exhibited at the various artists’ associations in the capital and in the Kunsthandel, contemporaries count her still lifes with “beaded cords, feathers, shoes and flowers.” Kaspar Niehaus even judges in 1937 that in her still lifes and figure pieces “sometimes a bit of sunlight shines”. Franken’s work is a harbinger of modern realism after 1945, often painted more raw, characterized by strong transitions from light to dark.

4) For comparison: between 1900 and 1910 there were 2072 articles about “Arti” in the press, in the following period between 1910 and 1920, and the First World War falls in those years, only 1269 messages appeared. After the war, the number of newspaper reports increases again. In the period from 1920 to 1930, 3182 articles appeared and from 1930 to 1939 no less than 3816 articles. The number of articles fell again after 1945. Between 1990 and 1999, only 376 articles about Arti were published in the newspapers. As a result, the number of articles has fallen to approximately the level of the 1850-1860 period (411). These data illustrate the increasing importance of Arti at the end and the first half of the twentieth century, after which the importance of Arti declined. The growth of Arti coincides roughly with a desire for a nationally oriented culture. The construction and opening of the Rijksmuseum are the main witnesses to the urge for a national culture in the late 19th century.

5) Initially, sculptors, engravers and builders, and musicians worked together in the Society. But they each formed their own circle or association. In 1920, Professor-Director of the Rijksacademie Antoon Derkinderen sighed that Arti had become one of those associations with only painters who might turn the Society into their ‘inalienable aura’. Antoon Derkinderen “De Feestreden” in De Gids, volume 84, 1920, First Volume (Amsterdam: P. N. van Kampen, 1920), p. 141–3.

6) Membership of the Society was socially and economically important for the artists. The artistic members of the Society came from the aristocracy and the well-to-do bourgeoisie and belonged to the clientele of portrait painters and still-life painters. Those art-loving members sometimes also had administrative influence, because the electoral law of 1850 stipulated that the members of the Senate were elected by members of the Provincial States from the highest-hit in the province. The patroness of Arti was Queen Wilhelmina, who annually awarded a medal to a deserving artist.

9) Buffa sold paintings by Jozef Israëls, J.H. Weissenbruch and the Maris brothers, as well as the Barbizon painters, and the Amsterdam Impressionists George Hendrik Breitner and Isaac Israëls and expressionists such as Kees van Dongen and Jan Sluijters.

11) Marianne Franken had personal contact with Caroline Eitje, who left a biographical sketch of Franken in the archives of the Jewish Historical Museum.

15) Singel 512, originally designed as a Vaudeville theater and subsequently converted into an office by the Jewish architect Isaac Gosschalk. a student of G. Semper. Among other things, he built the synagogue in ‘s-Hertogenbosch. The upper part of the Singel 512 building is important for the early history of photography in Amsterdam, as well as for the International Painter’s Studio and C. Ritsema, an Amsterdam joffer who worked there. (Institute for Cultural Heritage).

16) Freule Marie de Jonge studied at the Academy of The Hague and the Rijksacademie, where she studied with Prof. dr. N. van der Waay followed. Other students of Van der Waay are: Lizzy Ansingh, Tjeerd Bottema, Piet Mondriaan and Jan Sluijters.

17) Marinus van der Maarel (1857–1921), studied at the academy of The Hague and was taught there by Willem Maris, among others.

19) Da Costa was married to the sister of the graphic artist Samuel Jesserun de Mesquita.

21) Niehaus was a prominent art critic for De Telegraaf. As an artist, he is counted among the Bergen School.