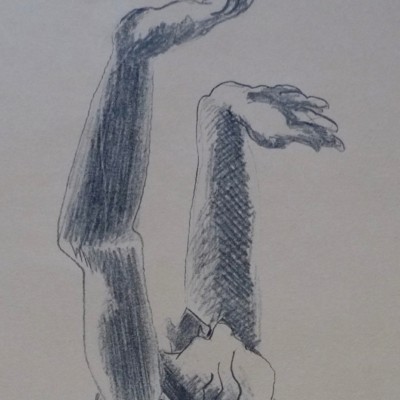 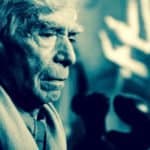 Ossip Zadkine was a French visual artist of Belarusian origin.

He became best known as a sculptor, but he also left an important oeuvre of gouaches and lithographs.

Zadkine was the son of a Jewish / Belarusian father, Ephime Zadkine, a teacher of classical languages ​​in Smolensk, and a mother of Scottish descent, Sophie Lester.

In 1905, his father sent Ossip to England, where he stayed with a cousin of his mother, among other things. From the fall of 1908 he took classes at the Arts and Crafts School in London. From October 1909 he settled in Paris. He met among others Léger, Archipenko and Chagall and became friends with Modigliani.

At the beginning of 1915 he volunteered and served as a soldier-stretcher in the French army. At the end of 1917 he was wounded in a gas attack. He obtained French nationality around 1918

in 1920, Zadkine married artist Valentine Prax. The wedding was witnessed by artist Foujita from Japan. In 1928 they moved to Rue d’Assas 100, where Zadkine had a studio and a garden.

From 1918 his work was strongly influenced by cubism. Very gradually he left this cubist line after 1926 to develop his own style that was strongly inspired by primitive art. During the interbellum period, Zadkine took part in numerous exhibitions at home and abroad.

On the advice of American friends, Zadkine fled, without a wife, in 1941 with a visa for Spain from Lisbon to the United States. He stayed in New York for the remainder of World War II and had a studio on Charles Street. In 1942 Zadkine participated with other exiles, including Fernand Léger, Max Ernst and Marc Chagall, in the group exhibition “Artists in Exile” at Galerie Pierre Matisse.

He met many Parisians such as Jacques Lipchitz, André Masson, Amédée Ozenfant and Antoine de Saint-Exupéry (The author of the booklet Le Petit Prince, of which 80 million copies were distributed in many languages)

He taught sculpture at the Art Students League of New York and in 1945 gave a summer course at Black Mountain College in North Carolina.

Back in France and teaching

In 1946 Zadkine returned to France. In Paris, he opened The Ossip Zadkine Studio of Modern Sculpture and Drawing on Rue Notre-Dame-des-Champs, primarily aimed at American students. In 1947 he moved back to his studio on Rue d’Assas and started teaching at the Académie de la Grande Chaumière. Hundreds of artists were taught by him there, including Jan Wolkers, in 1957

The destroyed city of Rotterdam

“The destroyed city” is an image that Ossip Zadkine made following the bombing of Rotterdam. It was unveiled on May 15, 1953 and is on Plein 1940, on the Leuvehaven, next to the Maritime Museum in Rotterdam. The statue is a famous national monument. Here is an excerpt of the moment of the unveiling of the famous statue.

It is said that Zadkine got the inspiration for the sculpture “The destroyed city” when he was on his way from Paris to his friend, the doctor Hendrik Wiegersma in the Dutch town of Deurne.

When the train drove over Rotterdam by air, he saw the city center wiped out.

A human figure without a heart

The statue is made of bronze and represents a human figure without a heart, a symbol of the heart of Rotterdam that was lost during the bombing.

Rotterdam received the statue as a gift from the management of department store De Bijenkorf. One of the conditions of the donation was that the image would remain in that and only that place. This later led to many discussions.

The statue wants to recall the destruction of the city by the Germans. The artist himself said about the sculpture:

“The [statue] wants to embody the human suffering that had to undergo a city that, with God’s grace, wanted to live and flourish like a forest. A cry of horror at the inhuman cruelty of this executioner work. “

Over the years, the image of the people of Rotterdam has received a zipper of nicknames; the image is known as “City without a Heart”, “Zadkini”, “Jan Gat”, “Jan met de Handjes” and “Jan met de Jatjes”.

Ossip Zadkine died at the end of 1967 at the age of 77 in Paris. He was buried in the Cimetière du Montparnasse.

His former home and studio, located on Rue d’Assas in Paris, now houses the Musée Zadkine.

Also in Les Arques, France, in the Lot department, there is a Zadkine museum in his summer residence, where a number of his works are exhibited.

In the crypt of the Romanesque church opposite this museum is a Pieta by Zadkine. In the town, which itself has been completely restored, there is an artist center.

Works by Ossip Zadkine are in the public collections of; Museum de Fundatie in Zwolle, the Van Abbe Museum in Eindhoven, Museum Beelden aan Zee in Scheveningen, Kröller-Müller Museum in Otterlo, Museum Jan van der Togt in Amstelveen and the Middelheim Museum in Antwerp

Deceased after WWIIArtists in Paris