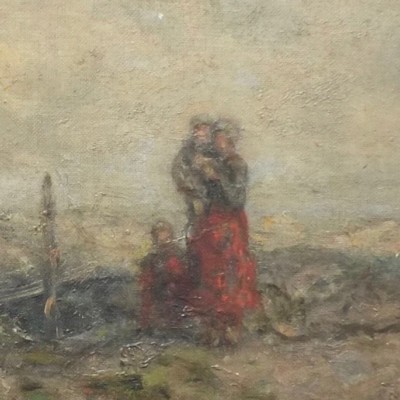 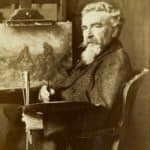 Elchanon Leonardus Verveer was a Dutch painter and graphic artist.

He is counted among the romantics.

Elchanon was born in The Hague, where he lived and worked all his life. He had 4 sisters and 2 brothers; Salomon (1813-1876) and Maurits (1817-1903), both of whom also made a name for themselves as an artist. It was a Jewish family. They adhered to Jewish customs and were part of the Jewish community in their hometown The Hague.

All three brothers were successful as artists. Through their work they transcended the poor social environment in which many German Jews were living. Their work sold well and was (inter) nationally exhibited.

Elchanon’s brother Samuel was a gifted painter and Elchanon’s other brother, Mauritz, made a name for himself as a photographer.

Mauritz realized that as a painter he “probably had less talent than his brothers” and focused on (portrait) photography.

Maurits also took pictures of members of the Royal family, such as the 1880 photograph in which Queen Emma looks at the newly born Wilhelmina.

They became the first professional and successful Jewish artists in the Netherlands. Yet they are little known.

Elchanon first went to the Haagse Houtgraveurschool and started as a graphic artist. He later took classes at the Academy of Fine Arts in The Hague. There Elchanon received lessons from his older brother Samuel and Herman from Kate, among others. He also studied briefly in Brussels. In 1857 and 1859 he traveled to Paris.

Leonadus Verveer mainly painted idyllic genre works, often with the theme of Dutch fishermen’s life, mostly in Scheveningen, by the sea and beach. He also did portraits of the local fishermen.

He worked in the style of romance, clearly showing the influence of Jozef Israels. Although nowadays Elchanon’s work is artistically lowered than that of his brother Samuel, he was certainly as popular in his own time.

Throughout his life, Elchanon would continue to produce graphic work and made a name for himself as a caricaturist.

There was a lively art climate in The Hague. The eldest brother Salomon played an active role in this, among other things by being one of the initiators of the founding of Pulchri Studio in 1847.

The purpose of this society was to promote the visual arts.

A number of caricatures were made that Elchanon made of members of the Pulchri Studio in The Hague, of which he was also a member.

In 2015, a retrospective of the work of the Verveer brothers took place in the Jewish Historical Museum.

Deceased before WW2Artists in Paris