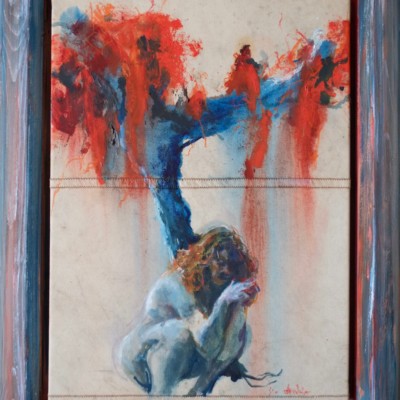 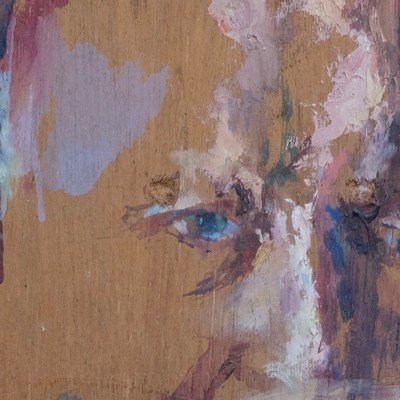 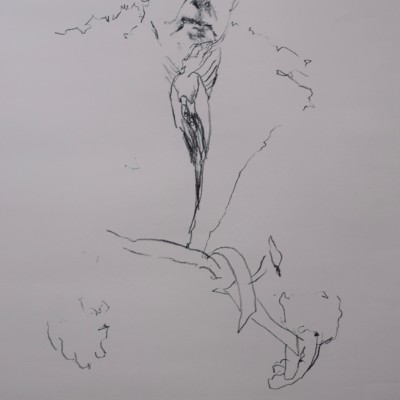 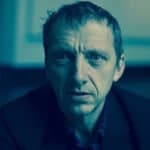 Education
Sam Drukker grew up in Assen. He studied at the Minerva Academy (1977-1982) in the city of Groningen, where he was taught by Matthijs Röling, among others. He also followed the Ubbo Emmius Teacher Training (1978-1984) in Groningen.

After his studies, Drukker lived and worked in Paris (1984-1985) and Amsterdam. Since 1997 he lives alternately in Barcelona and Amsterdam.

Teaching position
From 1990 he teaches at the Wackers Academy in Amsterdam. As a painter, Drukker is counted among the fourth generation of The Group and The Independent Realists. In 1991, he was co-founder of “Het Nederlands Portretschap”.

The installation, called “Minje”, portrays men who had experienced the Second World War as an adult man: a tribute to the Jewish tradition and to “survival”.

He depicted a generation that had to pick up the broken wire again after the war and pass it on to the next generation.

Searching
Sam Drukker feels part of that next generation and comes with “Minje” close to himself, in a search for his own identity; the painter thought he was not Jewish and was not raised Jewish either. In his youth, Jewish elements play only a small, meaningless role. Until he finds out that most of his father’s side of the family has been killed in the war.

Jewish identity
What is Judaism? Then who am I? Why was my father silent? They are questions of life that constantly haunt him from that moment on. A search for Sam’s Jewish identity begins.

In this way Minje helps him with the processing of his family history. A history that is disappearing with the death of all survivors of the war.

The ten Minje paintings and eighteen preliminary studies on paper were exhibited in 2014 in the Jewish Historical Museum in Amsterdam. The Minje project was then on display in the BAC museum in Switzerland and at Pictura in Groningen. See how Sam Drukker talks about Minje.

Appreciation
In 2011, Sam Drukker was chosen as “Artist of the Year”, a prize that he received on 5 November 2011 in the Hermitage Amsterdam. As a result of this election, Drukker exhibited in Museum Flehite in Amersfoort. The book “A thin skin” came out with this retrospective. This exhibition attracted more than 17,000 visitors.

Found pieces of wood
In terms of theme, we regularly recognize Biblical motives. According to Sam Drukker, these are very intriguing because of the inherent drama.

In Sam Drukker’s work, not only the figure is important, but also the figure, the posture and color combinations. Sam Drukker paints on found pieces of wood, board, etc.

“I paint on surfaces that have already had a life behind them, where the traces are visible. I respect that life, those traces, that story, and add my share to it. “